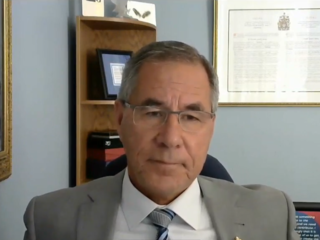 Russ Mirasty became Saskatchewan’s 23rd Lieutenant Governor in July 2019. He is the first Indigenous person to serve in this role.

Born and raised in La Ronge, Saskatchewan, His Honour is a member of the Lac La Ronge Indian Band and is fluent in Cree.  He joined the Royal Canadian Mounted Police (RCMP) in 1976, and was posted to seven provinces, performed duties in every province and territory, and participated in an exchange with the Northern Territory Police Service in Australia.  Following his retirement from the RCMP, Mr. Mirasty helped to lead educational initiatives and served on several boards to reduce poverty and promote community safety.

His Honour leads a very active lifestyle and regularly participates in running and cross-country skiing marathon events.  He and his wife, Donna Mirasty, have a home in La Ronge, and they have two children and two grandchildren.