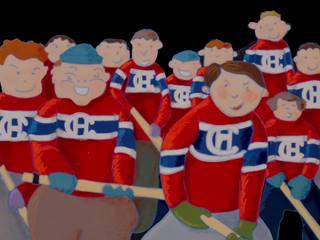 This video is an animated version of Roch Carrier's book, "The Hockey Sweater." It is set in the 1940s, when listening to the hockey game on the radio was a Saturday night tradition, as well as rooting for the Montréal Canadiens. All the boys worshipped Maurice "Rocket" Richard and proudly wore number 9 on their hockey sweaters. The boy in the story outgrows his hockey sweater, so his mother writes to Mr. Eaton for a new one. Instead of the coveted red, white and blue of the Canadiens, the company sends a Toronto Maple Leafs jersey. Imagine the young player's chagrin when he shows up at the neighbourhood rink in the blue and white colours of the arch-enemy.

Participating and Giving Our Personal Best Personal and Philosophical