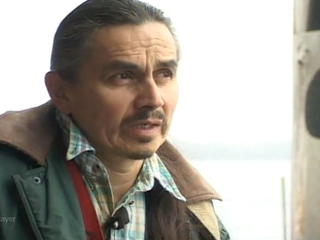 Series: From the Spirit
Jim Hart, a prominent Haida artist from Queen Charlotte Islands in BC speaks of this work as a carver. Some of Hart's totem poles are on display at the Museum of Anthropology at the University of British Columbia. He speaks of the influence that his grandfather had on him and his satisfaction with carrying on the family tradition of carving totem poles.