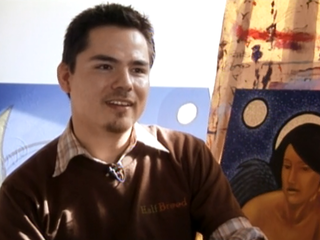 Series: From the Spirit 2
A descendant of the Cree and Cherokee and Norwegian people, Edmonton artist Aaron Paquette was a troubled adolescent who drank, did drugs and hurt people. When his twin sons were born, he reunited with his father who had abandoned him and his mother and he turned his life around. He speaks of the positive influence of native spirituality on his work and his belief that his work is a calling from a higher power.