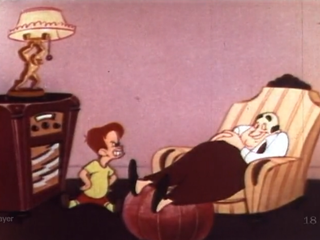 Series: Scanning Television, 2nd Edition
This program was developed based on Ontario's provincial standards document which links outcomes to eight key concepts. Teachers should preview the clips before classroom use as some content may be considered controversial (e.g., sexual innuendo, mild swearing and suicide).
These short videos are designed to increase media literacy skills. Students should develop an understanding of and how to use the mass media. The programs should assist students to understand and enjoy how media works, how meaning is produced, how media is organized, and how media constructs reality. Students should also be able to create media works. The videos include: 15. MADD Dolls PSA (2:47 min) This PSA appears to be an ad for toy dolls, until it turns into a drama about drunk driving. 16. Ground Zero Ads: Blast from Past (9:37 min) A small ad agency with a flare for some deeply nutty and compelling 17. Date Rape Ad Campaign (4:00 min) This print campaign for Toronto's Rape Crisis Centre sprang from a belief that a controversial campaign grabs more attention that straight-up. 18. Meet King Joe (4:46 min) A 1949 cartoon character learns that he and his fellow workers are the world's most privileged consumers. 19. Religion in Advertising (8:54 min) A look at some bizarre and controversial ads that employ religious imagery in marketing campaigns. 20. Culture Jammers (5:58 min) MediaTelevision's 10th anniversary program examines social activism in the Information Age. 21. Culture Jam: Hijacking Commercial Culture (15:34 min) Culture Jammers attack commercial ads with spray paint, felt pens and sarcasm. Is this civil disobedience in the name of self-defence? 22. PSAs Aimed at Youth: Rehab (1:07 min) A plea to teens to take action and provide support when friends use drugs. 23. PSAs Aimed at Youth: Brain (0:37 min) A bundle of wires short circuits and catches fire when exposed to the ravages of drugs. 24. Chosen (10:31 min) This BMW advertisement doubles as a short Internet film. Director Ang Lee (Crouching Tiger, Hidden Dragon) creates a gem about innocence in the midst of a car chase.

Teacher's Guide
Video: Seeing Ourselves: Media and Representation (1 to 14)
Video: Our Constructed Worlds: Media Environments (25 to 36)
Video: The Global Citizen (37 to 44)
Video: New and Converging Technologies (45 to 51)