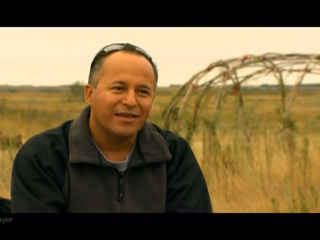 It's a Spiritual Thing. Rodger Ross

Series: Storytellers in Motion 2
Rodger Ross (Cree) is an urban filmmaker and storyteller. His films and stories, and his belief system, come directly from the reserve, from his community and his people and from the Cree traditions and spirituality that guide him. He tells us, "I've never actually spent a night on my reserve, ironically." He has worked in film and television for almost three decades, and long ago made a conscious decision to make films for his people in his own way - a way that serves his people, his community and his extended family. He talks about earning the right to tell stories, of respect, of the need to "do things in a good way" and of bringing traditional ways and thinking into the production process. He does this through his company, Creerunner Productions.