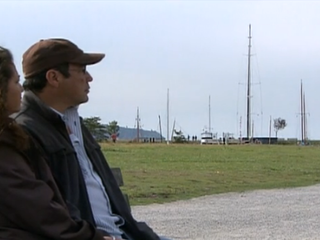 Series: Storytellers in Motion 3
Dennis Jackson (Cree) and Melanie Jackson (Métis/Saulteaux) are award-winning writers, producers and directors. They combine their talents for creative storytelling with finely-honed production skills and a developed knack for business, moving between live-action documentaries and the imaginary worlds they create through animation. They have produced an award winning and popular television series that taps the pool of talent, both in front of and behind the camera that is emerging in the prairies. Wapos Bay is brought to life in the production facilities of Dark Thunder Productions, the company Dennis and Melanie have established in Saskatoon in Northern Saskatchewan. The series is set in an imaginary community in Canada's north and is written from an insider's perspective. One gains an insight to the pathos and subtleties of reserve life.