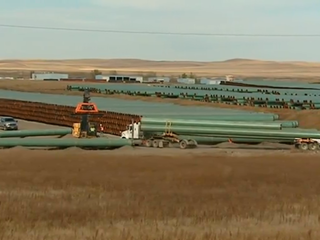 Series: News in Review: March 2012
The U.S. government delays approval of a pipeline to transport oil from Alberta to refineries in Texas. The Canadian government responds by saying it will speed up approval of another pipeline to carry the oil over the Rocky Mountains to British Columbia. This video looks at why the government wants the pipelines built and why so many are determined to stop them.