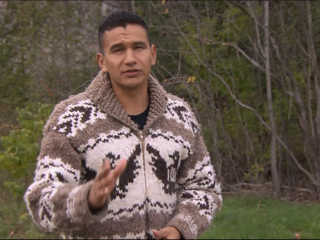 Series: 8th Fire
Some inappropriate language is evident when a clip of the program "Blackstone" is shown. Educators are advised to preview all video programs before using them in the classroom.
At the close of the 8th Fire series, we meet young First Nations people preparing to change the future, determined to light the 8th Fire and build a new relationship with Canada. A fascinating range of artists, activists and business people take us through ways to shed the colonial past and to build new pathways in education and economic development. This is all in pursuit of a new relationship to replace 500 years of conflict and injustices. In a forest in Quebec, Huron Wendat artist Teharihulen Michel Savard picks up a rifle and fires. His target: the 143-year-old Indian Act, colonial legislation that to this day governs the lives of most First Nations people. Realistic footage of reserves is included in the video and Regina's First Nations University of Canada is also featured. Answers to the challenges are suggested and positive messages are included.