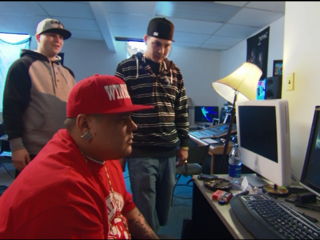 Indigenous in the City

Series: 8th Fire
Educators are advised to preview all video programs before using them in the classroom.
In the opening episode of the four-part series 8th Fire, host Wab Kinew, from the Ojibways of Onigaming First Nation in Northern Ontario, an award-winning hip-hop artist and now a Winnipeg-based TV journalist, invites us to come "meet the neighbours." It's about time, since many Canadians say they have never met an Aboriginal person. This vibrant, fast-paced episode introduces a diverse cast of Indigenous people living in the cities. They are united in a shared bond as Canada's First Peoples and in their determination to reassert their culture within a wider population of non-Indigenous Canadians. It is filmed in Winnipeg and it explores the negative images of First Nations peoples, including gangs, but also shatters the stereotypes held by some Canadians. It also presents an important message about the necessity of all Canadians working together.