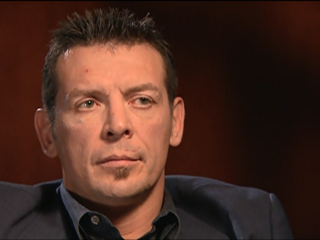 The Fall and Rise of Theo Fleury

Educators are advised to preview all video programs before using them in the classroom.
This is the story of Theo Fleury, who, against all odds, established himself as a major star in the National Hockey League. In his rookie year, he helped the Calgary Flames win the Stanley Cup and went on to rack up Hall of Fame stats. But, through it all, he was as troubled as he was talented and tough. This Fifth Estate episode relates Fleury's remarkable story, the staggering fall from grace that cost him millions of dollars, his family and almost, his life. Fleury talks about how he struggled back from the brink of despair to become clean and sober and ready to help others. He candidly discusses the dark issues that haunted him during the glory years, including the sexual abuse he experienced as a teenager at the hand of the now notorious junior hockey coach, Graham James. Behind Fleury's public bravado was a man struggling with addictions to alcohol, drugs and sex. His candid and unsentimental recounting of those years and, finally, his vanquishing of his demons, will be an inspiration to many - a cautionary tale for others. This video opens a dialogue for youth to be aware of these issues and to not feel as alone.