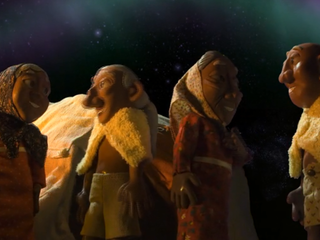 Series: Wapos Bay
Educators are advised to preview all video programs before using them in the classroom.
This award-winning series, produced in Cree, English and French, uses stop-motion animation to portray life in a fictional northern Saskatchewan community. It focuses on issues and events in the lives of children and their supportive families in this traditional Cree community. The adults guide the children to retain their traditional culture and values while living in the modern world. In this episode, six year old Raven must write a report on identity, describing who she thinks she is. Through talking to many people in the community, 10-year-old Talon reconciles her Cree-Metis identity as a daughter and sister. Cousin T-Bear and brother Talon are asked to help create a sweat lodge and through their hard work they earn their Indian names. Non-Aboriginal students viewing this film will gain a better understanding of Aboriginal identity and traditional practices. T-Bone's father's role at the band office provides a glimpse into First Nations governance and its complex issues.