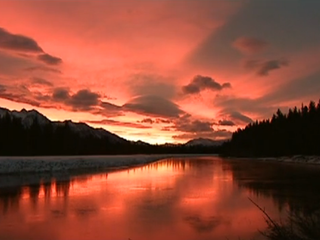 Series: Canada: A People's History
The Canadian West is opened by the great fur-trading empires (Hudson's Bay and Northwest Companies), the Indigenous people who were their indispensable allies, and bold explorers and mapmakers: Pierre Esprit Radisson takes New France's trade far into the continent's interior creating an English trading empire; Pierre Gaultier de Varennes, spends a lifetime searching for the Western Sea; Dene Chief Matonabbee leads Samuel Hearne on a monumental trek into the Barren Lands; Alexander Mackenzie's journey to the Pacific makes him famous; and David Thompson comes to the shores of Hudson Bay to unlock the secrets of the West more than any other man. As the fur trader's day comes to an end, settlers on the prairies and gold miners in British Columbia begin to claim the west for themselves.