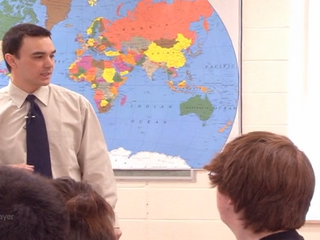 Series: Powerful Instructional Practices
In recent years, there has been extensive research in student learning and teaching practice in such areas as cognitive psychology, learning theory, and teaching strategies. Effective instruction can be learned and defined and it is an art as well as a science. There are four areas of thinking to which instruction is directed: knowledge acquisition, cognitive processes, metacognitive processes and the self-system (dispositions). Within this framework, there are many instructional practices that can focus on engaging the different types of thinking. An instructional cycle should engage all four types of thinking in students as teachers use instructional practices in sequence or in tandem. It is important that teachers encourage students to become autonomous learners. A part of the Powerful Instructional Practices Series, this program on structured academic controversy is introduced by Ian Krips, Associate Director of Saskatchewan Professional Development Unit (SPDU): Professional Growth Partnerships. Krips states that structured academic controversy is similar in format to a formal debate, encourages dialectical thinking in students and is a process for helping students to create reasoned arguments. Krips goes on to explain that while it may seem to be a competitive process, the structure leads students to work collaboratively to express their opinions and ideas and then asks them to think on the other side of the issue as well. He informs viewers of the following steps for designing a structured academic controversy (adapted from the work of Bennett and Rolheiser's Beyond Monet: The Artful Science of Instructional Integration, 2001). 1. Identify the controversy. 2. Create groups of four to six. 3. Allow time to plan. 4. Allow time for each group to share. 5. Plan the rebuttal. 6. Present the rebuttal. 7. Change seats, and change your mind. 8. End with a round robin discussion. In a classroom scenario, a Native Studies 20/30 teacher provides his class with a statement regarding The Indian Act, and the students are divided into two groups to argue both sides of the issue. He leads them through the steps in the process as they explore the opposite side of the issue and then build a consensus position in their group. The session finally ends with a round robin discussion that provides students with an opportunity to share their learning, and to discuss the impact of the process on their thinking. More information on structured academic controversy and other instructional practices can be found in the document entitled Powerful Instructional Practices: A Resource for Teachers and Administrators.

Powerful Instructional Practices: A Resource for Teachers and Administrators