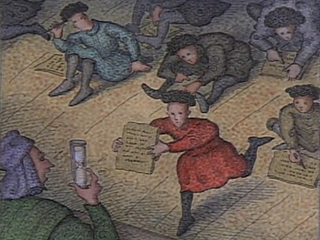 Blockhead. The Life of Fibonacci

In this video, the life of Leonardo Fibonacci is examined. Living in medieval Italy, Leonardo constantly thought about numbers. People called him blockhead because he daydreamed about numbers. As Fibonacci grew older and travelled the world, he studied how other countries use numbers and how they represent a numeral. Today, Fibonacci is famous for his word problem about multiplying rabbits. He also discovered that things in nature seem to follow a certain pattern. Fibonacci is considered to be one of the greatest Western mathematicians of all time. This video is an adaptation of the picture book written by Joseph D'Agnese and illustrated by John O'Brien.