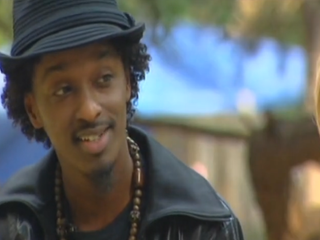 K'naan. A Canadian Sings for the World

Series: News in Review: May 2010
He was born in the war ravaged African country of Somalia and grew up on the streets of Toronto. Now K'naan is a global singing sensation and his song, Wavin' Flag, is the official song of the 2010 world soccer championship in South Africa. This interview with K'naan explores how his turbulent life has influenced his music and his message.